Abusir is the Arab name given to the Greek town of Busiris and the Old Kingdom necropolis in its vicinity. The Greek name Busiris is derived from the ancient Egyptian phrase “pr wsir” (“the house of Osiris) which relates to the temple of Osiris. There are in fact a number of small villages in Upper and Lower Egypt with the name Abusir or Busiri. 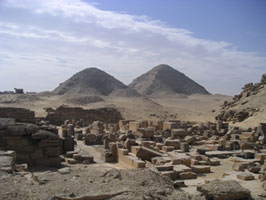 The necropolis of Abusir was the primary burial site for the pharaohs of the fifth dynasty of ancient Egypt. It lies across the Nile from the ancient city of Memphis (“mn nfr”) to the south of Giza and north of Saqqara. The site was probably chosen because the necropolises of Giza and Saqqara were already littered with pyramids and tombs and Abusir Lake linked the site to the river and made it easier to deliver supplies to the site by boat.

There is a marked reduction in the quality and grandeur of the pyramids when compared with those of their illustrious predecessors of the fourth dynasty – in particular the pyramids of Giza (including the Great Pyramid) and the Step Pyramid of Djoser. They are largely constructed in local stone which is itself of poorer quality than the large blocks which were transported for miles to construct the pyramids of Giza and Saqqara. This may suggest a waning of royal power or imply that these pharaohs had less disposable wealth or other pressing concerns which diverted their resources away from pyramid building.

The first pharaoh to build at Abusir was Userkaf, the first ruler of the fifth dynasty. He constructed the first known example of a solar temple at the site. A number of his successors also built solar temples at Abusir, but chose to construct their burial pyramids there (whereas Userkaf built his pyramid beside the enclosure wall of the Step Pyramid of Djoser at Saqqara). The last solar temple to be built there was apparently constructed by Menkauhor, although this monument has not been located to date. It would also appear that, like Userkaf, he chose to build his pyramid elsewhere (at Dashur). After his rule, the pharaohs abandoned the necropolis at Abusir but it remained popular with Egyptian nobles throughout pharaonic history.

It is thought that there were at one time fourteen pyramids in the necropolis of Abusir, although only four are still in recognizable condition: the pyramids of Sahure, Neferirkare, Niuserre (which is in the best condition), and pyramid of Neferefre (unfinished). There are a number of smaller pyramids and mastabas at the site which have largely collapsed into rubble (including a pyramid dedicated to Khentkaus II – the wife of Neferirkare) and a tomb dedicated to Ptah-Cepses (which is in poor condition). There is also an unfinished pyramid which is generally attributed to Shepseskare. There are a number of Sun Temples to the north at Abu Gurab which were also constructed by the pharaohs of the fifth dynasty.

In 2017 a Temple dating to the reign of Ramesses II was uncovered by the Egyptian-Czech mission. The temple is around thirty-two meters long by fifty-two meters with a large court behind it and two long storage rooms flanking it. Egyptologists have concluded that the court was enclosed by mudbrick walls which were painted blue, and the side walls were lined by stone columns. At the back of the court, a staircase leads to an elevated stone sanctuary which was divided into three chambers. The temple seems to have been dedicated to the solar cult, in particular the gods Ra, Amun, and Nekhbet. Fragments of polychrome reliefs and numerous examples of the titles of Ramesses II have been recovered.

ABOUT US
Ancient Egypt Online is written and maintained by Jenny Hill. Jenny received her Certificate in Egyptology from Glasgow University.
Contact us: info@ancientegyptonline.co.uk
FOLLOW US
© Jenny Hill

This site uses functional cookies and external scripts to improve your experience.

NOTE: These settings will only apply to the browser and device you are currently using.

Cookies that are necessary to enable my site to function. They do not store any information about you other than that which is strictly required for navigation and function, and I have no aceess to any of the data.

A cookie which helps me track how many visitors come to my site and what pages they look at.